This was the declaration of Agriculture Secretary Emmanuel F. Piñol to over 400 farmers, fisherfolks, and representatives of different government agencies and local government units who participated in the 1st ever Biyaheng Bukid—Tapatan: Gobyerno at Mamamayan in the province of Masbate.

Biyaheng Bukid is a way of bringing the government agricultural and fishery programs closer to the farmers and fisherfolks.

Piñol also turned-over other assistance and interventions totalling to over Php16M to other farmers associations and LGUs in the province of Masbate which include farm machineries, equipment, hauling truck, green super rice and vegetable seeds, fertilizers and flower inducers, chicken, mallard ducks and garden tools.

Piñol cited that the main problem of farmers is the lack of capital or the lack of access to easy credit.

According to Agricultural Credit Policy Council (ACPC) Special Project Development Officer Ding Pereyra, their office allocated Php2M pesos for Masbate and is ready for release this month. Upon learning the allocation, Piñol increased the amount to Php20M for farmers who will be availing the Production Loan Easy Access (PLEA).

PLEA Program is a credit program for small farmers without collateral and with a 6% annual interest. However, interested farmers will undergo a training on Financial Management.

Piñol also cited that fisherfolks need a cold storage for their catch. He added that 40% of the fish harvest is wasted due to lack of cold storage. He disclosed that DA has the Agricultural and Fisheries Machinery and Equipment (AFME) Loan Program where fisherfolks can loan for the purchase of delivery trucks, establishment of cold storage facilities, establishment of ice-maker or ice flakes maker, and purchase of fish boat. The interest is only 2% per year and eight years to pay. He mentioned an Ice flakes maker which costs Php1.7M can be loaned under AFME with 6% annual interest. The DA will subsidize the 4% interest leaving the fishermen to pay only 2% of the annual interest.

“If we give farmers and fishermen access to credit with less interest, doon lang kayo makakaahon,” he said.

Since Masbate is a livestock producing province, the basic need for the production is forage. Piñol presented the advantages of Sorghum which is a good silage material and its fruit can be used as chicken feed. The protein content of this crop is higher than corn. The DA plans to establish 100,000 hectares of sorghum in the country.

Piñol pronounced that Masbate will soon be the Sorghum Development Center of the Philippines.

He also pointed out that the country should invest in agriculture. The country needs Php42B pesos over the next two years to irrigate 500,000 hectares of rice fields.

He also enumerated five present needs of agriculture: finish the farm-to-market road networks in the Philippines; solar irrigation; post-harvest facilities especially cold storage; proper food positioning and establishment of food boats that will ship farm and fish produce all over the country; and increase easy-access credit.

“Whatever we do now cannot be easily felt. We must reform today, because if we will not, then the next generation will suffer,” quipped Piñol. (jaysonmgonzales with photos by Jhun Collantes) 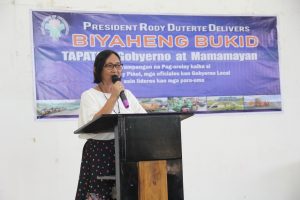 Masbate City Mayor Rowena R. Tuason delivers a welcome message and extends her gratitude to Department of Agriculture-Bicol for the support and assistance . 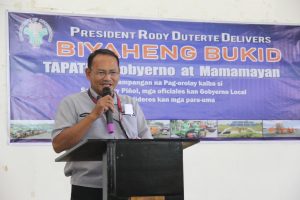 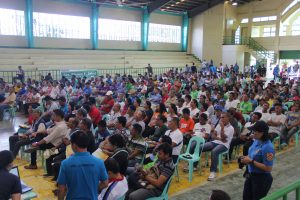 More than 400 farmers, fisherfolks, and representatives of different government agencies and local government units attend the 1st ever Biyaheng Bukid—Tapatan: Gobyerno at Mamamayan in the province of Masbate. 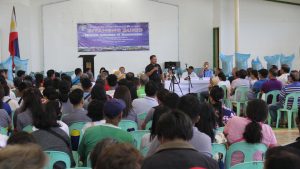 Agriculture Secretary Emmanuel F. Piñol addresses the attendees of the 1st ever Biyaheng Bukid—Tapatan: Gobyerno at Mamamayan in the province of Masbate. 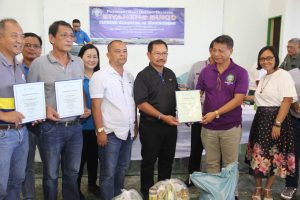 Municipal Mayors and Municipal Agriculturists receive their Certificate of Award of agricultural interventions and assistance.